On soundtracks and the start of the second year

Back to All Blog Posts

On soundtracks and the start of the second year
Dan Mollett, Boatbuilding & Restoration Student Ambassador
Jul 24 2019 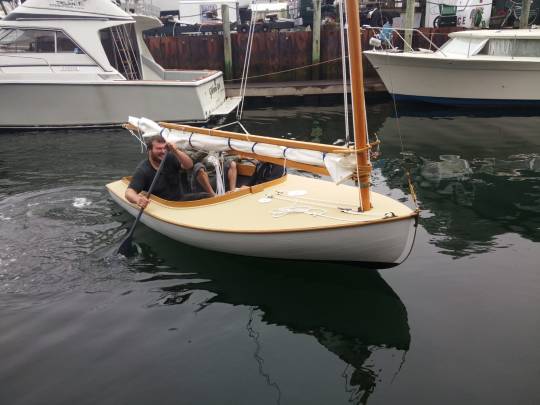 Paddling the Beetle Cat out to the bay on Launch Day last June.

Before I came to IYRS, a friend of mine used to say that I lived my life to the theme song of Bonanza. I was, at the time, living and teaching abroad, traveling often, and during vacations I often found myself on cliffsides overlooking Peru’s Sacred Valley or standing in the middle of a waterfall or walking under the northern lights in Norway or eating at one of the world’s best restaurants or…you get the idea. I spent a lot of time in front of a classroom or in faculty meetings or grading stacks of essays as well, but I understood what my friend meant, and I was so charmed by his selection of the Bonanza theme that I would sometimes play it after a day of particularly incredible peak experiences. Even though most of my life was consumed with work and housekeeping and the rest of the stuff that we all do, I was aware that I had more free time and opportunities for travel than most, and the Bonanza theme became a way to take a minute and recognize my good fortune.

Before that, when I was in graduate school in Oregon, another friend told me that it sounded like I grew up in a Tom Waits song. The stories I chose to tell back then, in my early twenties, always highlighted the rougher characters in my hometown and some of my stranger academic pursuits (participant-observer research of alternative religious movements, anyone?), and I suppose I was looking for that kind of comparison. I was, after all, a young, bookish type who wanted to seem adventurous and was probably prouder than he ought to have been of his record collection. Naturally, though I outwardly laughed at this comment, inwardly I couldn’t have been prouder for successfully presenting this persona. It wasn’t entirely a fabrication, I guess–I really had encountered some strange characters in my life even then–but it was a function of picking and choosing which stories to tell. My year on the debate team or several years of participating in community theater productions probably wouldn’t have contributed to the image I was trying to cultivate at the time, so I usually kept them to myself.

The metaphorical soundtrack to my life in the year I’ve spent at IYRS has been harder to pin down. (The literal soundtrack is pretty easy, as last year the shop speakers were pretty much just spitting out an infinite loop of CCR’s “Fortunate Son.” I’ve got nothing against CCR, but let’s try to do better this year, ok team?) What is the appropriate song or artist (or classic television theme?) to encompass the experience of pursuing the greatest single change of direction in one’s life? Maybe I’ll just stick with Nick Cave–my favorite record of his is called The Boatman’s Call, after all. But it’s bleak as hell, and my time in the BBR shop at IYRS has been anything but bleak.

Since coming to IYRS I’ve learned a lot about building boats, but it’s also made me more confident about tackling any material problem I encounter. I’ve spent the last year seeing how things fit together, which has helped me solve problems with the alternator on my old pickup and fix an air-mixture problem on the ragged old motorcycle I bought last year, among other things. Even simple maintenance activities–changing oil or repainting the flaking door of my apartment–have taken on more significance in my time here. I just don’t know yet what the soundtrack will be. Probably, as with the Bonanza theme and the Tom Waits song of my previous lives, someone else will supply me with it at some point down the line.

We have eight months left in Restoration Hall before they boot us out to make room for next year’s incoming class, and lately our class has been repeatedly wondering aloud about what we’ll do when we graduate. Many of us have job offers in hand, or at least the indication that there is likely a place for us somewhere, but as far as I know most of us haven’t definitively committed to anything at this point. In my case, at least, it’s partially about location–which coast do I want to live on? In which country? But it’s about something more complex than that as well. It has something to do with feeling like the world is a bit more interesting and open than it was before my time here, but I can’t quite put my finger on it just yet. I suppose I’ll spend the better part of this year trying to figure it out.

When I pulled into Newport to start the Boatbuilding and Restoration program in September of 2017, I’m pretty sure I did so with Steve Earle blasting in the crackly speakers of my pickup. Growing up in a small South Dakota town as a younger version of that bookish weirdo described in the second paragraph, I had developed an antipathy toward country music altogether, but that changed little by little the farther I moved away from home. By the time I was circling back to the US to attend IYRS, my go-to playlists were as country-fried as anything out there. The pop-country of the nineties and later will always grate on my ears, but lately Steve Earle, Townes Van Zandt, and Emmylou Harris are more likely than not what’s playing if I’m in the shop by myself.

At least it’s a break from “Fortunate Son” on repeat.